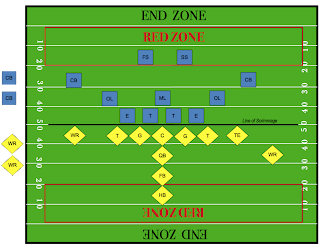 Michael Vick is the best in the league at scrambling and escaping defenses.  He led the league last year in number first downs achieved by scrambling with 23.  Now you should be able to notice quarterbacks who move out of the pocket like Atlanta Falcons QB Matt Ryan and those who stay in the pocket like Ben Roethlisberger.
Tonight MNF features a huge, divisional rival.  The Washington Redskins are visiting the Dallas Cowboys.  I’ll be at the game!  Follow me on twitter @heelsnhelmets to know what is going on at Cowboys Stadium.  The game kicks off at 8:30 pm on ESPN.
Ciao!
Heels & Helmets
Posted by HeelsnHelmets at 8:00 AM No comments:

Panthers need some D to win

It is so trite to say it, but I cannot help it.  Defense wins championships.  In football, those who have it stop teams in the redzone and deflate loud stadiums.  Those who don’t, well to say it again, don’t win championships.

Look at the Green Bay Packers and Carolina Panthers game yesterday.  Rookie Cam Newton is putting up record numbers.  In both of his NFL games so far he has thrown over 400 passing yards.  He threw 432 passing yards against the Packers.  This was over 100 yards more than those of the opposing quarterback, Aaron Rodgers who had 308 passing yards.
Those are impressive offensive stats, but they have not netted the Panthers a win.  The difference between Green Bay and Carolina is defense.  The veteran squad led by 7-time Pro Bowl corner Charles Woodson intercepted three of Cam’s passes.  The Packers won 30 – 23.
The long passes, great catches and fast runs are just nice stats if you do not win.  The Panthers must step it up on defense to get their first win.
Ciao!
Heels & Helmets
Posted by HeelsnHelmets at 9:24 AM No comments:

Wel-CAM NEWTON to the NFL

Football returned over the weekend and Carolina Panthers QB Cam Newton was ready!  A lot of stuff happened during the first weekend of the NFL season, but I have to talk about the debut of the #1 overall pick of the 2011 NFL Draft.
Cameron “Cam” Newton kicked off his NFL career by setting a record.  The surprising part is that the record is for passing yards and not rushing yards.  Cam is the first rookie to throw 422 yards in his first NFL game.  All three of the Panthers’ touchdowns in their season opener came from Cam.  He threw two touchdown passes and ran one yard to get in the end zone for a touchdown.
Cam’s performance was impressive for any rookie, but it is more remarkable because he was drafted during the NFL lockout.  He didn’t have OTAs (organized team activities), mini camps, team training, or meetings with coaches.  He did not have the annual orientation or the rookie symposium.  His preparation for the NFL was limited to training camp.  You would not have guessed any of this from the way that he played yesterday.
Critics talked about Cam needing a year to prepare and develop into a NFL style quarterback.  Well from what he displayed in his first game, Cam is ready now.  Athletically, he silenced the people who said that he could not throw the ball.  He showed maturity and poise and did not rush out of the pocket.
Cam’s performance was not enough for the Panthers to get a win over the Arizona Cardinals, so they have some work to do.  (The final score was 21 – 28, Arizona.)  This is just the beginning for Cam.  As he builds on this solid debut, teams better watch out.
Ciao!
Heels & Helmets
Posted by HeelsnHelmets at 8:32 AM No comments:

The NFL 2011 Season is finally here!  The preseason is over.  Now every down counts.  Each inch is crucial.  It’s time to back up all of the trash talking.  All eyes are focused on Indianapolis, Indiana, the host of Super Bowl XLVI.  Who will get there?  Who will hoist up The Lombardi Trophy?
The AFC has their usual team leaders who will contend for the conference championship.  New England Patriots, Pittsburgh Steelers, Baltimore Ravens and New York Jets will all make the playoffs again.  The Indianapolis Colts is not on this list because I think Colts QB, Peyton Manning’s neck injury will cause their offense to suffer.  I think that the Jets will make it back to the AFC Championship for the third year in a row and win it this time.  The offense will start slow.  QB, Mark Sanchez still has Santonio Holmes, but the other receivers are older and new to the team.  Once wide receivers Plaxico Burress (34 years old) and Derrick Mason (37 years old) get comfortable, their experience will help the offense.  The star unit is the defense.  The Jets returned 10 of their starters on defense.  These players know the defense and what needs to be done to take down Tom Brady (Patriots QB) and Ben Roethlisberger (Steelers QB).  Last year Jets cornerback, Darrelle Revis was only productive half of the season.  This year he prepared with his team during training camp and will start the season healthy.
The NFC is going to be really competitive.  The last two Super Bowl winners came from this conference.   The Green Bay Packers and the New Orleans Saints were the champions in 2011 and 2010 respectively.  Both of these teams will compete for the NFC Championship, but I think that the Philadelphia Eagles will win the conference title.  The Eagles are good on both sides of the ball.  The offense is led by QB Michael Vick.  Everyone is concerned about the Eagles offensive line.  It is an issue because Vick needs to be protected to stay healthy, but I don’t think that it will stop him from having a great season.  On defense, the Eagles have the best secondary, not just in the conference, but the NFL.  Eagles cornerbacks, Nnamdi Asomugha, Dominique Rodgers-Cromartie and Asante Samuel will throw a wrench in every team’s passing game.
I picked teams with powerful defenses to go to the Super Bowl.  The Jets have continuity and the Eagles have talent and speed.   I am predicting the Eagles to win Super Bowl XLVI.  This isn’t because of the dream team chatter.  Here are three reasons why.
1.     Defense was a problem for the Eagles last year and they clearly solved it.
2.     Michael Vick is not only back; he is focused.  After the first preseason game, he commented, "I went back and looked at film by myself in the offseason and a majority of the time last year Brent was open and I failed to throw to him because I was focused on DeSean and Jeremy."
3.     The Eagles swooped in out of nowhere and signed Asomugha.  They have some other tricks up their sleeves.
The season kicks off this Thursday at 8:30 pm when the Green Bay Packers host the New Orleans Saints.  Some people think that this is a preview of the NFC Championship game.  I think we will see one of the teams that will face Philadelphia in that game.
Ciao!
Heels & Helmets
Posted by HeelsnHelmets at 10:58 AM 1 comment: